□From Kannai Station-approximately 11 minutes on foot
Exit to the South gate turning right approaching Shonan Fujisawa bank cross along the signal light heading to Odori Park.
Walk straight to the Isezaki-chojamachi station Yokohama Blue line passing along the Police Station,Fire station and AEON,turn left at Nagashima bridge and Lawson Convenience Store.
Hotel is on the 3rd building on the left!!

□From Yokohama Blue line,Isezaki-chojamachi station-5 minutes on foot
Exit at 4B Gate approaching Odori Park.
Pass along the Police Station,Fire station and AEON,turn left at Nagashima bridge and Lawson Convenience Store.
Hotel is on the 3rd building on the left!!

19th century architectural design that opened in 1917. It is a historical heritage building which is also currently serves as the Naka Ward Hall. It is a two story building which is made of stained glass. The tip of the clock tower is lit with lights that over-pass the intersection. The lightshow on the red bricks takes you back in time to a different age – Yokohama in its golden era. It is close to a Minatomirai Line station, making the building a good starting point for visiting Yokohama night views. Also nominated as a “Japan Heritage Night View”. 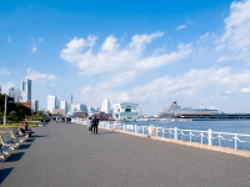 The first romantic park in Japan located at the seaside right in front of Yokohama Port. The park includes a grass field, a rose garden, the “Little Girl With Red Shoes On” statue, the “Guardian of Water” statue which is a gift from San Diego, a sister city of Yokohama, and the “Kamome no Suihei-san (Seagull Sailor)” song monument, water stairs and a stage. The former cargo and passenger ship Hikawamaru is anchored here. 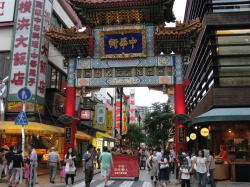 Yokohama Chinatown is known as the world’s best Chinese food spot. With more than 600 shops in with plenty of food shoppes to choose from. Workers from restaurants and food stalls, cute and colorful sundries shops, and more call out in loud voices to entice customers. The buildings and signs in brilliant colors and you remember Chinatown as a completely different world! There are a total of 10 "Pairo" gates particularly on the main street is the Zenrinmon which has a sign reading "Chinatown” at the center of it. A structure which is very symbolic of the town. The gates in the four cardinal directions are based on Chinese Feng Shui and each direction represents a guardian god. Each gate has its own design and coloring based on the four guardian gods.